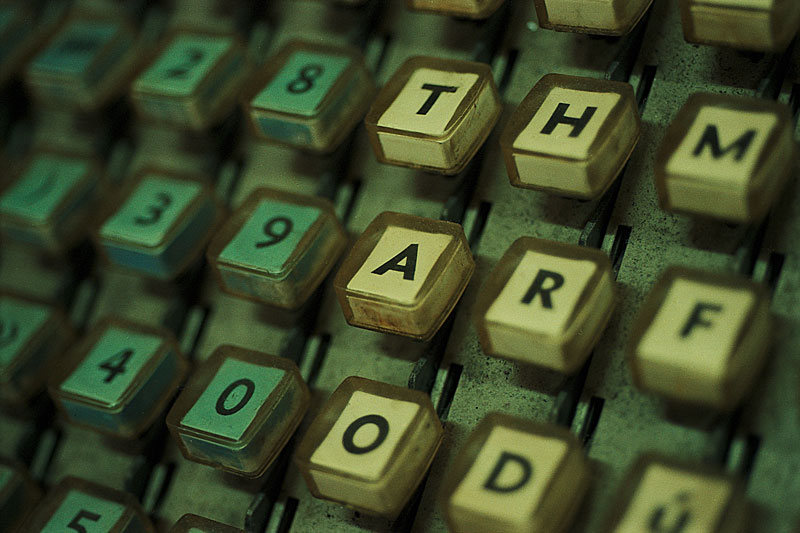 When i started working in graphic design, more than 20 years ago, i was already a Mac user, and a good one. But it was clear to me that a computer, even a Macintosh, wasn’t going to be enough as a tool to learn what i needed to know.
One day i discovered the Linotype and i was immediately mesmerized by it. I applied for a job in a local printer that had kept all the typography department intact, and i spend my days doing boring computer work just that i could escape to the typography department when the computer was outputting to film (it took hours sometimes)… there i learned how to typeset by hand and only then to work on the Linotype. It is everything they say on the documentary Linotype, The Film. I miss the noise, the smell and learning with people that knew so much about typography that from those days on i realized that typography is something very precious and have since admired the craftsmanship and dedication all those men put into their work. It’s with some sadness that i watch the film knowing that this will someday be lost and never be seen by people that will do graphic design in the future…
I still dream buying a Linotype and setup a little print shop of my own… that would be nice.

About the Linotype, The Film documentary:

Linotype, The Film is a feature-length documentary centered around the Linotype type casting machine. Called the “Eighth Wonder of the World” by Thomas Edison, it revolutionized printing and society. The film tells the charming and emotional story of the people connected to the Linotype and how it impacted the world.
The Linotype (pronounced “line-o-type”) completely transformed the communication of information similarly to how the internet is now changing communication again. Although these machines were revolutionary, technology began to supersede the Linotype and they were scrapped and melted-down by the thousands. Today, very few machines are still in existence.
The highly-skilled operators of the Linotype are in a battle against time. If their skills are not passed along to a new generation of operators, the machine will die completely. There is a small group of former operators that want to save the Linotype from the scrap yard, but some see this as a fruitless endeavor.
What place does the Linotype have in the age of new technology? Should the machine be shoved into a museum and left to rust? Why should anyone care about typography or the technology of communication? The film seeks to answer these questions.

About the Linotype Keyboard:

The Linotype is remembered, by the observers of its operation, for the layout of its keyboard, which has letters arranged in decreasing order of frequency in everyday English. The first two vertical rows of keys are ETAOIN and SHRDLU, and if Linotype operators should make a mistake in composing, they will sometimes run their fingers down these two rows, thus filling out the line with nonsense; example: etaoinshrdluetaoinshr. This is known as a run down. It is often quicker to cast a bad slug than to hand-correct the line within the assembling mechanism. The slug with the run down is removed once ejected, or during the printing form setup by another individual. If not there, it will be caught by the proofreading department. Run downs are occasionally used to quickly fill out a line, should that line have only a few words or characters in its beginning. In this case, only the run down will be trimmed from the top of the slug, with the remaining slug still intact.

The Linotype keyboard has the same alphabet arrangement given twice, once for lower-case letters, the keys in black, on the left side of the keyboard, and once for upper-case letters, the keys in white, located on the right side of the keyboard. The blue keys in the middle are punctuation, numbers, and solid spaces. In proper keyboard operation, the experienced operator’s left hand operates the spaceband key, and the left vertical row of keys only. The operator’s right hand strokes the remaining keys on the entire keyboard.

Because these cookies are strictly necessary to deliver the website, refusing them will have impact how our site functions. You always can block or delete cookies by changing your browser settings and force blocking all cookies on this website. But this will always prompt you to accept/refuse cookies when revisiting our site.

If you do not want that we track your visit to our site you can disable tracking in your browser here:

The following cookies are also needed - You can choose if you want to allow them: